Although North Korea did not specify what the operational duties for the new frontline units will be, analysts say that the country may have the intention to deploy shorter-range tactical nuclear weapons that target South Korea along their border with the South.

Kim Jong Un, the leader of North Korea had just concluded a meeting in Pyongyang where he reaffirmed that the country would be building up nuclear arms in the face of "hostile forces" and approved the unspecified operational duties for frontline military units.

In the meeting, Kim Jong Un told his military "to go all out" in bolstering the country's military might and "powerful self-defense capabilities for overwhelming any hostile forces and thus reliably protect the dignity of the great country".

What was notable, however, is the focus on the North's shorter-range weaponry. Since 2019, the country has been focusing on expanding its short-range solid-fuel missiles.

While this short-range missile may not pose a danger to the United States, they send a clear message to South Korea, which is well within range.

One indication that these missiles are meant for South Korea is that during the three-day meeting of North Korea's Central Military Commission (CMC) last week, the country's state media showed maps of territory within South Korea during the meeting with North Korean military leaders. 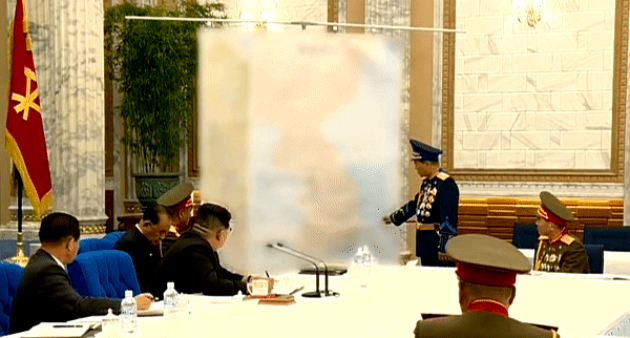 "I think the matters that were decided at the CMC meeting are against the spirit of the military agreement,” Kwon stated at a press conference on Monday, responding to a question about the inter-Korean agreement signed on September 19th, 2018.

Yoon Suk-yeol, who at the time was South Korea's president-elect had accused North Korea of breaching the agreement after the North tested the MRLS system in March, although the previous administration who is known to be soft on the North contested the accusation, saying that the test happened outside of the buffer zone they had agreed upon.

Kwon said on Monday that North Korea intends to increase its firepower against "both" the United States and South Korea, but said that the recent tests show that the North is increasingly focused on targeting the South.

"The change in ballistic missile ranges from the long ones to the short, and moving [its focus] from strategic nuclear weapons to tactical ones, could be seen as targeting the Republic of Korea" he stated.

In that sense, I want to point out that those who said that North Korea’s nuclear weapons do not target South Korea: they are wrong" he added.

"But their [strategy] targeting South Korea these days — looking at it from a certain angle, it gives me a hopeful wish that they might resume dialogue with South Korea soon" Kwon continued.

Kwon said that "all preparations are ready" for the North to conduct a seventh nuclear test and is monitoring the international situation for the right timing in order to 'maximize' the effect of the nuclear test on the world stage.

He said that a nuclear test in the current "unstable" international security situation will have "massive criticism" that will not be ending with "just words".
"If North Korea wants to improve the current situation and thinks of a much better future, Kim Jong Un and the country’s leadership should give up on nuclear testing and come out to the road of cooperation with the international community," he said.

Kwon asked both Russia and China to step up and help convince the North to refrain from conducting another nuclear test, saying "As one of the responsible, big powers, I trust that Russia is well aware how stabilizing Northeast Asia is important for stability and peace of the world and will act as such".