Russian and Syrian vessels have been turning off their transponders and have been accused of deceptive shipping practices in order to sell crude oil and stolen Ukrainian grain while evading the heavy sanctions placed on Russia due to its war on Ukraine. 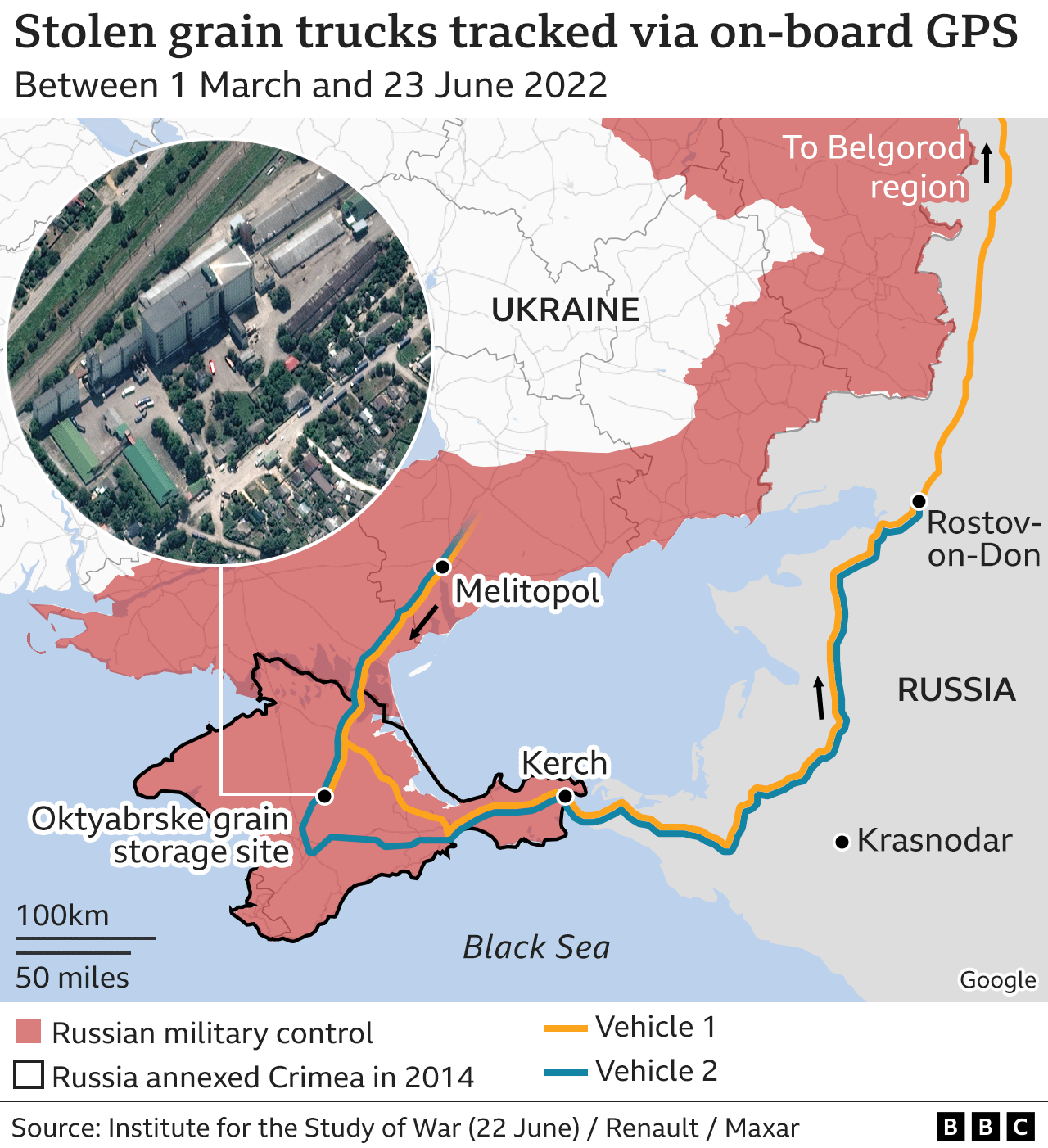 The 700-meter-long Matros Koshka bulk carrier named "the sailor cat" in Russian reportedly turned its transponder off in the Black Sea over three weeks ago and hasn't been seen since.

Around a dozen other Russian and Syrian vessels have also turned off their transponders, either to avoid crude oil or other sanctions or believed to be selling stolen Ukrainian grain abroad.

On Friday, Ukraine asked Turkey to arrest the Zhibek Zholy, which is a Russian cargo ship that visited the port of Karasu for the "illegal export of Ukrainian grain" from occupied Berdyansk.

Ukraine's prosecutor general's office asked Turkey to "conduct an inspection of this sea vessel, seize samples of grain for forensic examination, demand information on the location of such grain".

Just one day before this Yevgeny Balitsky which is an official that Russia placed in the Russian-occupied territory of Zaporizhzhia had stated on Telegram that the first ship to leave the port in Berdyansk since Russia captured the city was carrying 7,000 tons of grain, what Russia calls "friendly countries".

After publishing the information, however, Yevgeny Balitsky removed all references to what the ship's cargo was from the Telegram account.

The news journal Lloyd’s List had carried out an investigation last month and named nine other vessels that they had claimed were involved in suspicious behavior that pointed to smuggling grain.

All of these ships are not only capable of hauling the grain but were spotted sailing between ports in Crimea, Turkey, and Syria. All of them were also caught turning off their transponders while sailing in the Black Sea.

Turkey, however, has denied all allegations of allowing illegal grain imports from Russia or Syria, and Ukraine's ambassador to Turkey has stated that he's working to track down suspected grain imports that were stolen.

Much of the allegedly stolen grain has also reportedly been shipped by Russia to North Africa and sold to drought-stricken countries that are facing possible famine. 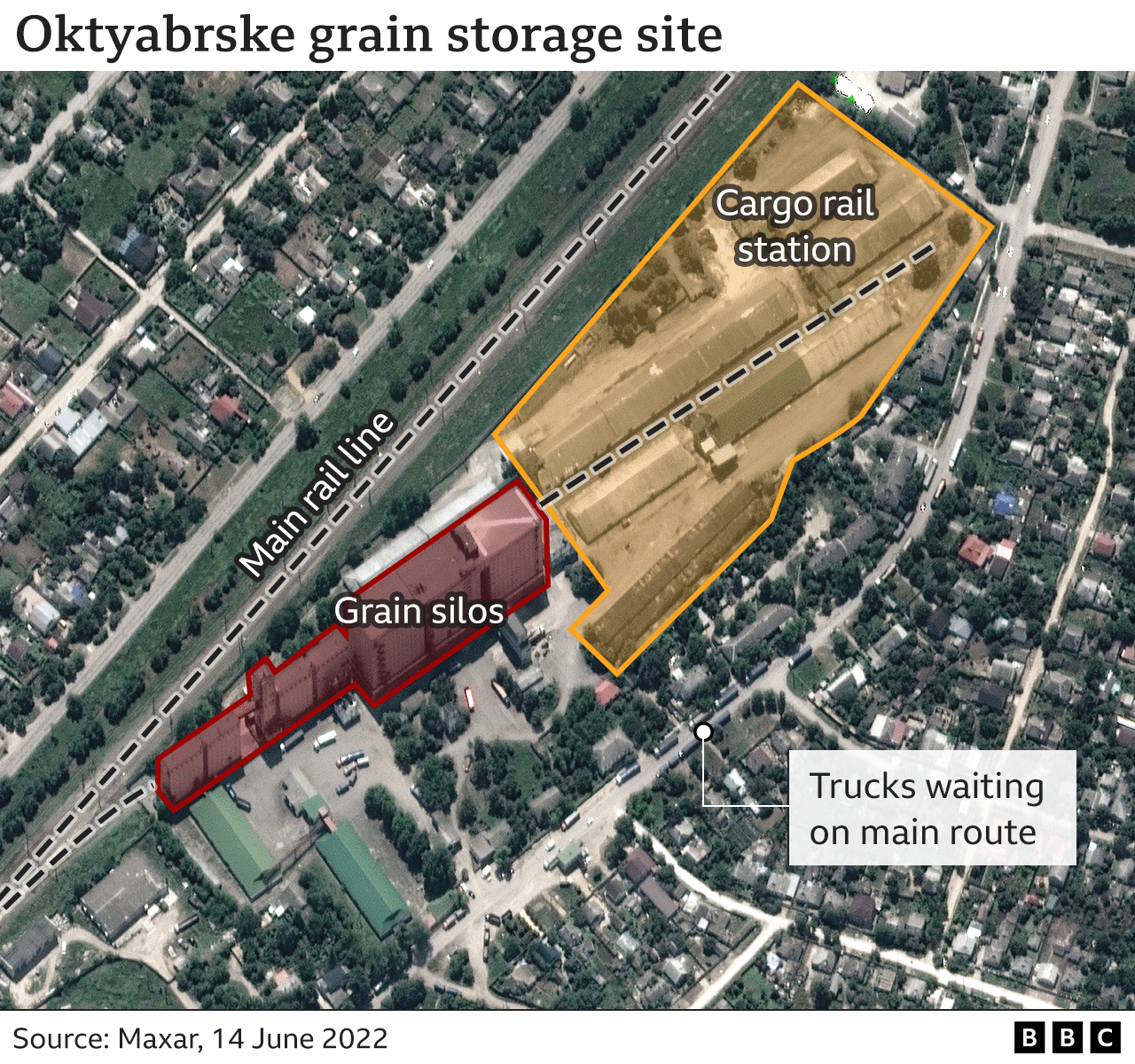 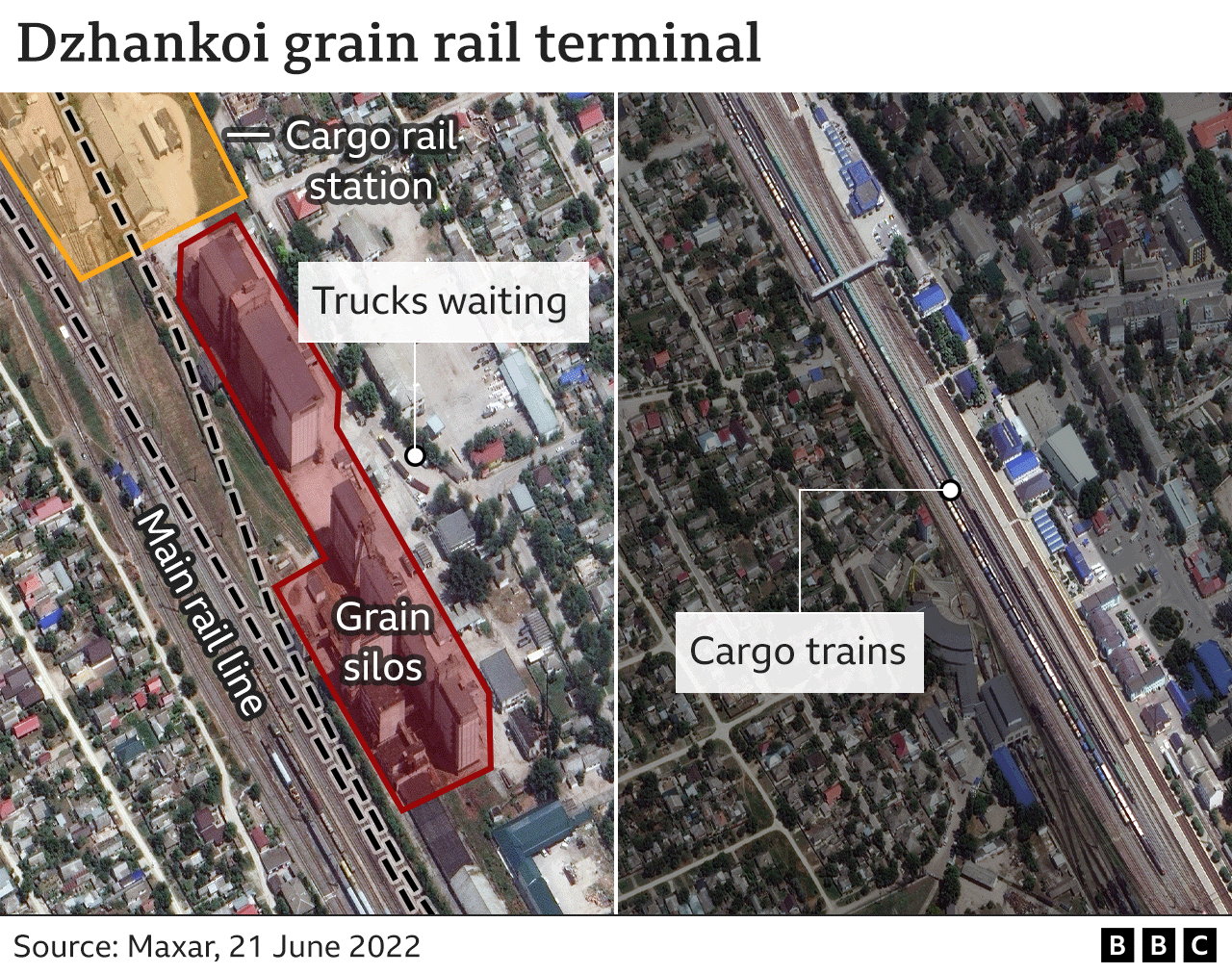 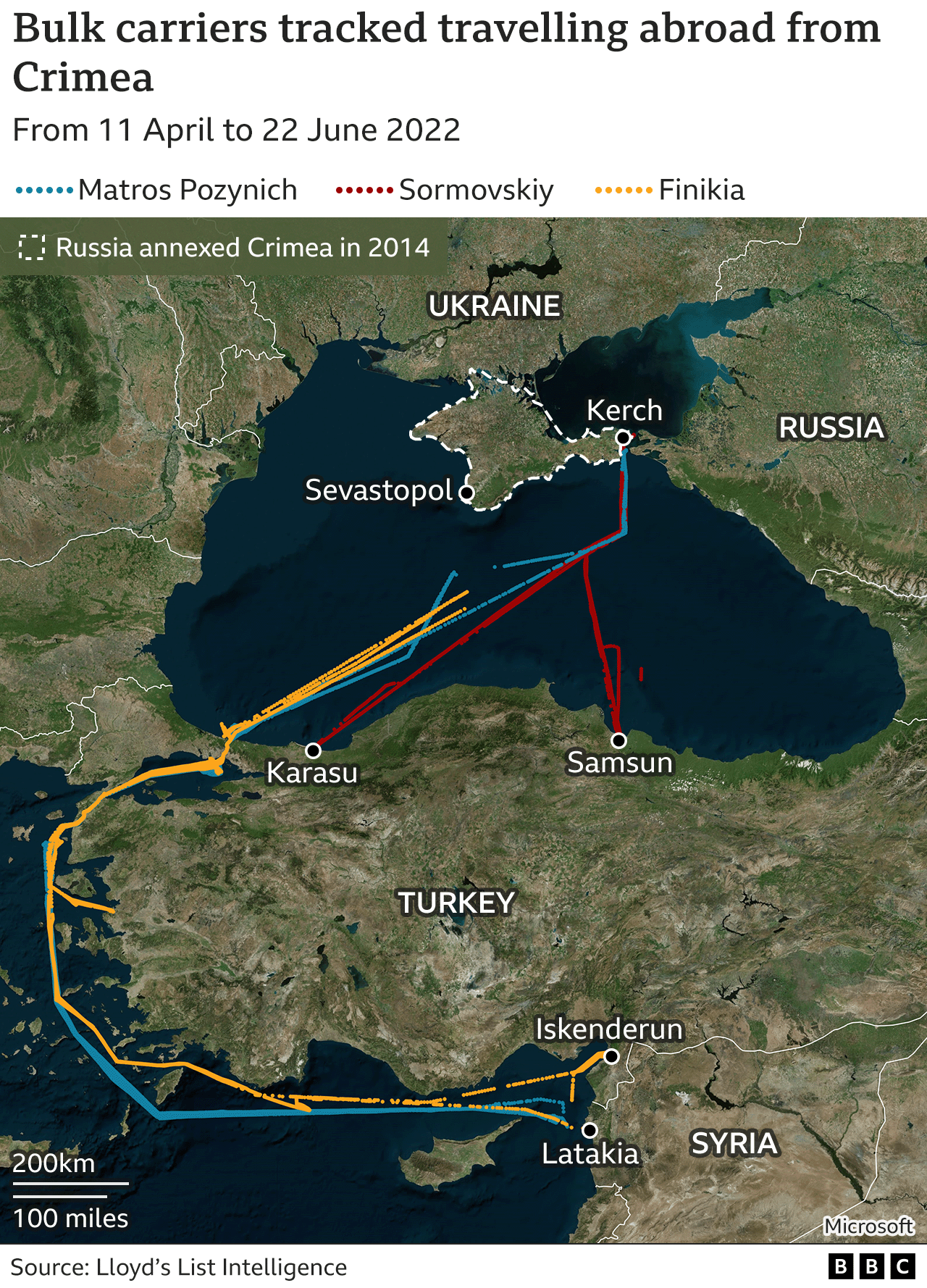 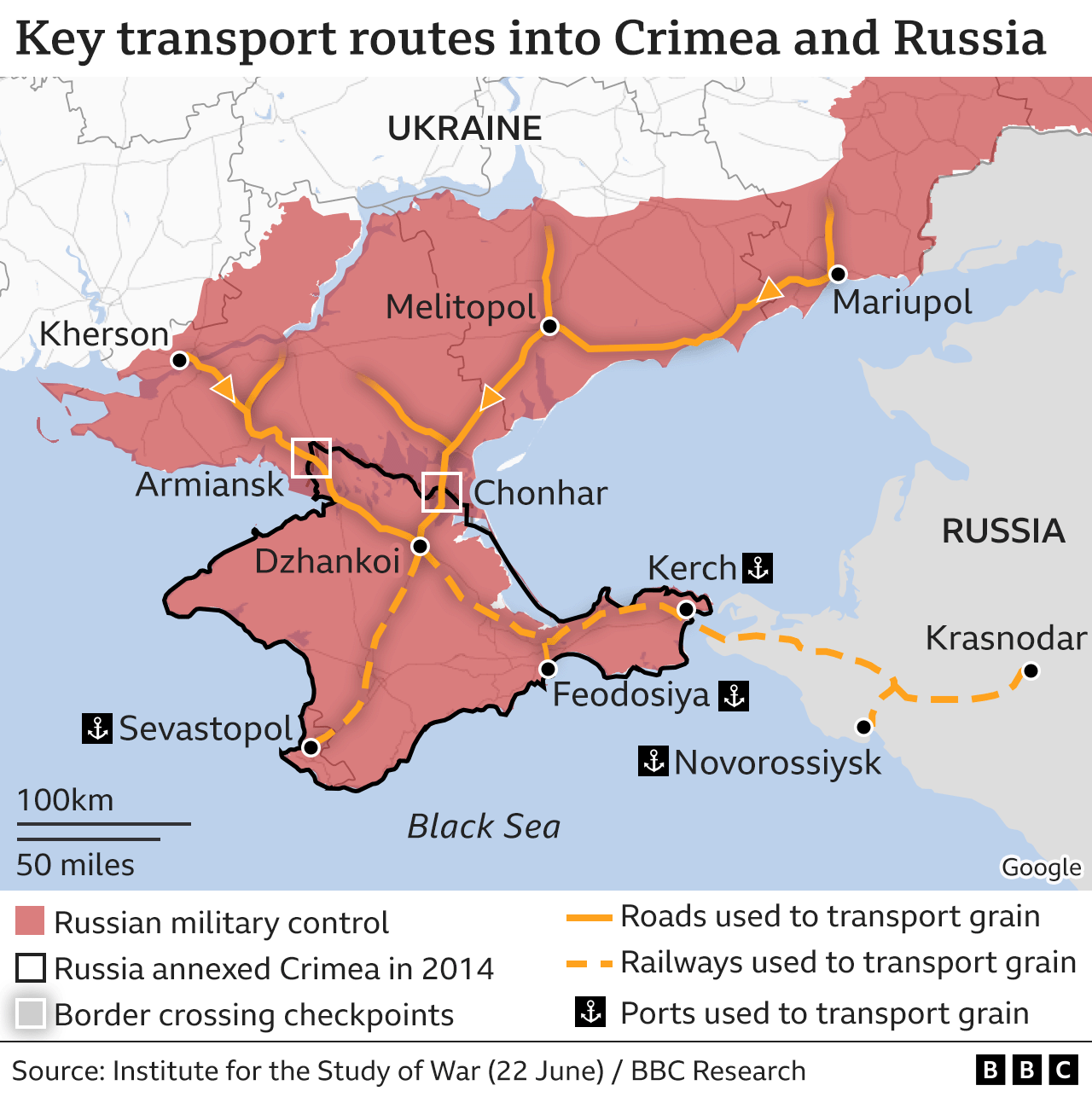 Photo sources:
Maxar, Institute for the Study of War, and Lloyd's List Intelligence Via BBC News.
Click to expand...