NORTH KOREA - The leader of North Korea, Kim Jong Un stated on Monday that not only is the country going to be boosting its nuclear weapons program, but said that its nuclear weapons could be used "in any situations of warfare" while carrying out a military parade displaying the North's ICBMs, according to state media.

Before the parade began to commemorate the 90th anniversary of the founding of the Korean People's Revolutionary Army (KPRA) which included the display of North Korea's largest ICBM, the Hwasong-17, the leader made a speech that Washington said was troubling. 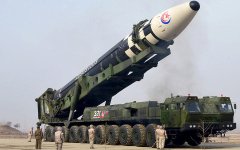 According to the North Korean state-run news, Central News Agency Kim Jung Un said, "In particular, the nuclear forces, the symbol of our national strength and the core of our military power, should be strengthened in terms of both quality and scale, so that they can perform nuclear combat capabilities in any situations of warfare, according to purposes and missions of different operations and by various means".

During the speech, Kim said that the North's nuclear weapons can be used as a deterrence, but also suggested that is not the only situation they might be used in.

Kim stated, "Our nukes can never be confined to the single mission of war deterrent even at a time when a situation we are not desirous of at all is created on this land. If any forces try to violate the fundamental interests of our state, our nuclear forces will have to decisively accomplish its unexpected second mission.”

Although North Korea had claimed that they tested the new Hwasong-17 Intercontinental Ballistic Missile (ICBM) successfully on March 24th, the South Korean Defense Ministry stated that they believed the missile was actually a modified version of the older Hwasong-15 ICBM.

Both Washington and South Korea also said that a missile was tested by North Korea on March 16th, but was a failure and exploded prematurely less than a minute after launch, at an altitude of less than 20 kilometers and may have caused fragments of the missile to rain down on Pyongyang.

Analysts believe that the failed missile that blew up shortly after launch was actually the Hwasong-17 and that North Korea attempted to make up for the failure by launching a modified version of the Hwasong-15 later that month and attempting to pass it off as the Hwasong-17.

South Korea's Defense Ministry told AFP, "U.S. and South Korean intelligence has determined that what was fired on March 24 was a Hwasong-15", but both the Hwasong-17 and Hwasong-15 are capable of hitting the U.S. mainland.