U.S. P-8 Poseidon Had Been Patrolling Near The Moskva Before It Sank

Status
Not open for further replies.

A new U.S. surveillance aircraft was reportedly over the Black Sea just before the Russian missile ship, the Moskva was sunk on April 13th. Some British news sources have reported that it transmitted important targeting data to Ukraine, but we have found that there have been some discrepancies regarding that information and have reason to believe it's possible this could just be a rumor. Our intel team does believe the original report by The Times was accurate, but that it may have been embellished by other sources.

While Ukraine claimed that they fired two Neptune missiles at the Moskva as it patrolled South of Odesa, Russia first claimed that a fire on the ship resulted in the ignition of onboard ammunition, causing a massive explosion but then admitted that it had been taken out by hostile action.

One source reported that the United States marine surveillance P-8 Poseidon aircraft had been tracking the Moskva just hours before it was allegedly attacked and had transmitted its location to the Ukrainian military.

We have heard reports that this is just a rumor and could be false information, also it is very common for P-8 aircraft to be patrolling around that area so it's possible that the sighting and the hit on the Moskva were not in any way related. We have not been able to verify whether the information is either accurate or misinformation thus far but we'll keep you posted.

The Boeing P-8 Poseidon has roles in anti-submarine warfare, anti-surface warfare, and shipping interdiction and is armed with torpedoes, Harpoon anti-ship missiles, and other types of weaponry. The aircraft can drop sonobuoys or small buoys or canisters that can be ejected from the aircraft that is fitted with technology to conduct anti-submarine warfare or underwater acoustic research. It is also equipped with an APY-10 radar. The buoys can then be used to detect enemy ships. 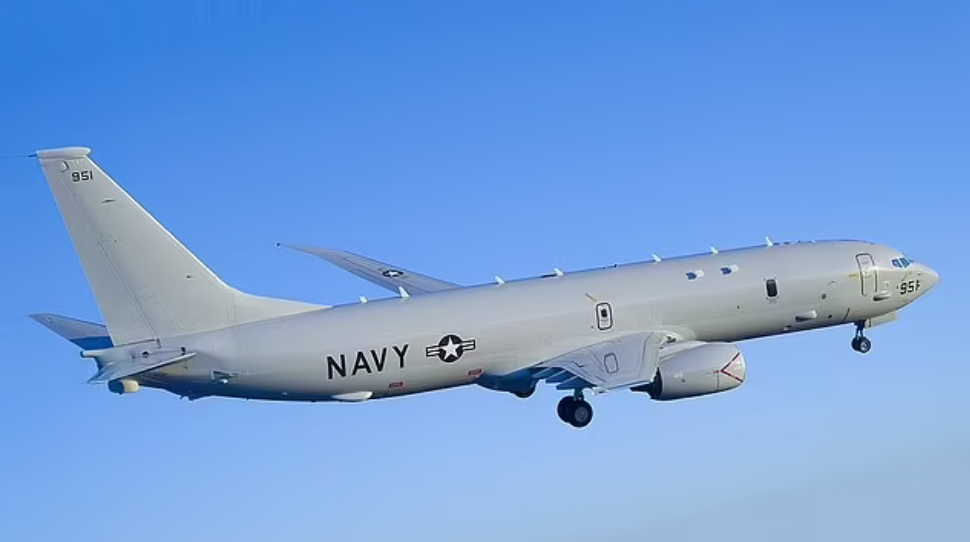 The Times of London said that the P-8 Poseidon had been based at the U.S. Navy base in Sigonella, Italy, on the island of Sicily. The Poseidon P-8 is estimated to have an operational range of a 1,200 nautical mile radius. The radar is capable of mapping 10,000 square meters of radar from a distance of 220 miles, which would put it within range of the Moskva the day that it was sunk.

On April 13th, a P-8 Poseidon with a hex code of AE681B was spotted leaving the U.S. Airbase at Sigonella in Sicily, Italy, and was then detected over the Mediterranean at 1:32 pm local Kyiv time.

FlightRadar24 data then showed the P-8 flying over the Balkans and Bulgaria, after which it flew over the Romanian coast in the Black Sea in the afternoon. The last known position of the aircraft was Valea Nucarilor, Romania which is about 12 miles from the Ukrainian border, at 3:27 pm, about 100 miles from the location where the Moskva was found after allegedly being hit.

It had begun descending from an altitude of around 29,000 feet down to 11,900 feet just before dropping off FlightRadar24 tracking and disappearing.

It disappeared for about 2 hours and 56 minutes before appearing again at 6:23 pm, where it was seen flying towards the Black Sea coast above Casimcea in Romania, around 37 miles from the position it had been before it disappeared.

It is standard procedure for an aircraft to turn off its transponder or the device that broadcasts its location before entering any kind of conflict zone.

Around 19 minutes later the aircraft disappeared from the radar once again and then reappeared after 42 minutes near Abrud, in Romania at 7:24 pm. After that, it traveled back to Sigonella.

The Moskva was first reported to have been hit at 8:42 pm after a Facebook post that came from a Ukrainian who had links to the military, and then at 10:31 pm, the Ukrainian governor of Odesa confirmed that a strike had been carried out on the vessel.

U.S. Defense Secretary Lloyd Austin had reported earlier in April that the United States is providing intelligence to the Ukrainian military, which included a comment from a U.S. defense official that said, "In keeping with our support to Nato’s eastern flank, we have been conducting some limited air patrols off the coast of Romania. But we will not speak to the details of operational matters".
Last edited: Apr 21, 2022
Click to expand...

Status
Not open for further replies.