Putin: "I Am Confident We Have Not Lost A Thing" From Ukraine Conflict

MOSCOW - After Washington put out an intelligence report saying that Russia is Requesting Arms From North Korea, Russian President Vladimir Putin spoke at the Eastern Economic Forum and said that he is "confident" that Russia hasn't lost a thing during Russia's ongoing conflict with Ukraine.

"I’m confident that we have not lost a thing, nor are we going to lose anything," he said at the forum. "The greatest achievement is stronger sovereignty for Russia, which is an inevitable outcome of what is currently happening. It’s true we see a certain polarization in the world and inside the country, but I think we will only stand to benefit from that."

Putin also claimed that Russia did not initiate war in Ukraine, but said that they are trying to "end the military action", which Putin claims began in 2014 after a Ukrainian "coup d’état".

"We did not start anything as far as military action goes. We’re trying to end the military action,” Putin said. “The military action started in 2014 after a coup d’état in Ukraine by those who did not want a normal, peaceful development, who wanted to suppress their people," Putin stated.


What Really Happened In 2014, That Led To The Conflict?​

According to a BBC report in November 2013, protests began in Ukraine after former Ukrainian president Viktor Yanukovych refused to sign an EU association agreement that would have aligned Ukraine closer to the European Union, citing "pressure from Russia" for his decision.

The report stated that "Mr. Yanukovych announced he was suspending preparations for signing an association agreement in Vilnius, which would have opened borders to goods and set the stage for travel restrictions to be eased."

The former Ukrainian president "argued Ukraine could not afford to sacrifice trade with Russia, which opposed the deal," according to the report.

A well-known boxing champion and opposition figure Vitaliy Klitschko reportedly told the crowd that gathered in the square, "Today they stole our dream, our dream of living in a normal country."

Yanukovych then tried to squelch the protesting, which was dubbed "Euromaidan protests" by cracking down on the protestors, fueling the protests further after more than 100 protestors were killed in three months' time.

A report by Reuters in November, of 2016 said that over 100 demonstrators were killed in Maidan square, and reported that 48 of them were shot by police snipers, who, according to "Ukrainian authorities", received orders directly from Yanukovich.

Yanukovich, who was backed by the Kremlin blamed "armed nationalist radicals" for cultivating violence that led to the protestors being killed, and was eventually forced to flee the country into exile, according to a 2016 report by Reuters.

It should be pointed out, that while the protests were said to have started out peaceful, they did in fact graduate into riots after becoming violent. 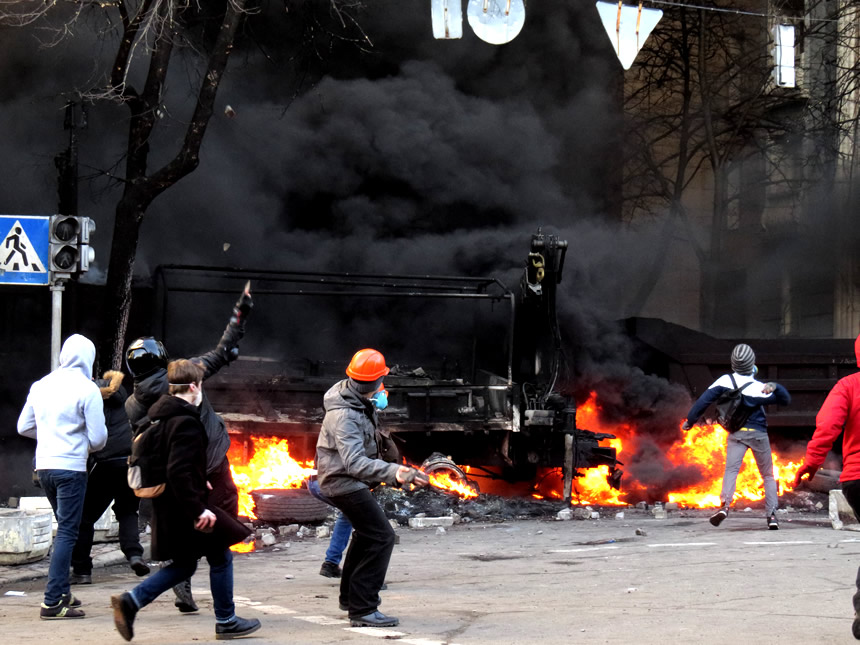 A Politifact Article from January 2014 revealed that protesters who were once part of the 'once-peaceful protests' were throwing Molotov cocktails during clashes with police in central Kyiv, Ukraine.

After fleeing the country, Yanukovich claimed that his ousting was a "coup", and said that he did not give any orders to fire at protestors, but that he was attempting to prevent bloodshed.

"Different provocations escalated the situation. Radicals and those who manipulated them were guilty. They provoked the bloodshed," he stated.

"It was reported that the shooting was being conducted from buildings that were under the opposition’s control. I did not give any order to shoot," he added.

After the former Ukrainian president was driven into exile, Russia, realizing that it had lost influence in the country commenced its 2014 invasion, leading to the annexation of Crimea by Russia.

When he was asked whether or not he had signed a request for Russian troops to commence the invasion into Ukraine, Yanukovich refused to answer the question, but deferred the question to his lawyer, according to the Reuters report.