DOD - The Defense Department has put out a statement saying that the Biden administration has approved another assistance package valued at $675 million in "U.S. assistance to Ukraine", along with another $2 Billion in long-term military financing to "European countries threatened by Russia". 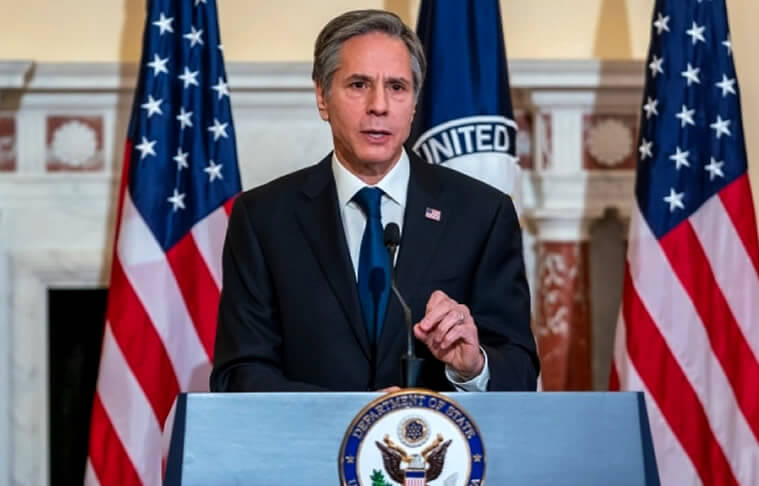 In regards to the $678 million in assistance, the Defense Department says that this will be the 20th "draw-down of equipment from U.S. stocks for Ukraine since last August".

The statement also said that "The U.K. has sent a second tranche of M270 MLRS launchers and munitions. That brings British assistance to Ukraine to a total of 2.3 billion pounds."

AP News said that the U.S. Secretary of State made an "unscheduled" visit to Kyiv, Ukraine on Thursday, the same day that the Biden Administration announced the additional military aid of more than $2 billion USD for Ukraine "and other countries threatened by Russia," according to the AP report.

The report stated that Biden had notified congress of the additional $2 billion in aid for "long-term Foreign Military Financing to Ukraine and 18 of its neighbors," which includes NATO countries and "regional security partners" that are "most potentially at risk for future Russian aggression".

The report says that the $2 billion in additional aid is still pending congressional approval, but that it is expected that the package will be approved. Around 1 billion of the aid will go to Ukraine, while the other 1 billion will be divided among the following countries: Albania, Bosnia, Bulgaria, Croatia, the Czech Republic, Estonia, Georgia, Greece, Kosovo, Latvia, Lithuania, Moldova, Montenegro, North Macedonia, Poland, Romania, Slovakia, and Slovenia, according to the State Department.

The State Department said that the money will help the respective countries "deter and defend against emergent threats to their sovereignty and territorial integrity," by enhancing each country's military integration with NATO and countering "Russian influence and aggression".

The State Department also said, "This assistance demonstrates yet again our unwavering commitment to Ukraine’s future as a democratic, sovereign, and independent state, as well as the security of allies and partners across the region".
Full Department Of Defense Statement Regarding The Draw-Down Of $678 Million To Ukraine

"Today, the Department of Defense (DoD) announces the authorization of a Presidential Drawdown of security assistance valued at up to $675 million to meet Ukraine’s critical security and defense needs. This authorization is the Biden Administration’s twentieth drawdown of equipment from DoD inventories for Ukraine since August 2021.

Capabilities in this package include:

In addition, State Department notified Congress of our intent to make $2 billion available in long-term investments in Foreign Military Financing: $1 billion to bolster the security of Ukraine and $1 billion for 18 of Ukraine’s regional neighbors.

To meet Ukraine’s evolving battlefield requirements, the United States will continue to work with its Allies and partners to provide Ukraine with key capabilities."
Department Of Defense Fact Sheet: Itemized List on U.S. Security Assistance to Ukraine

In total, the United States has committed approximately $15.2 billion in security assistance to Ukraine since January 2021, including more than $14.5 billion since the beginning of Russia’s unprovoked and brutal invasion on February 24.

The United States also continues to work with its Allies and partners to provide Ukraine with additional capabilities to defend itself.
Secretary of Defense Lloyd J. Austin III at the Fifth Ukraine Defense Contact Group

"Good morning. It's great to be here with you all for our fifth meeting of the Ukraine Defense Contact Group.

Thank you all for being here today. And let me especially thank my friends and colleagues, Ukrainian Minister of Defense Oleksii Reznikov and Deputy Chief of Defense Lieutenant General Moisiuk. The Ukrainian Armed Forces have inspired the world with their determination to defend their democracy. And you've inspired everyone in this Contact Group with your resilience and courage. Thank you for joining us in person today.

Today, we're back at Ramstein, where this Contact Group was founded. And we're here to renew our commitment—and intensify our momentum—to support the brave defenders of Ukraine for the long term.

Now, our group first came together four months ago—at a turning point in Russia's reckless and ruthless war of choice against Ukraine. Back then, Russia had lost its battle to take Kyiv, conquer a peaceful neighbor, and overthrow the democratically elected government of Ukraine. During that initial phase of the war, we joined with nations of goodwill from around the world. And together, we surged in critical military aid to help Ukraine defend itself from flagrant Russian aggression.

To take just one example among many, consider howitzers. In April, the United States delivered our first batch of M777 howitzers—introducing NATO-standard artillery pieces to Ukraine for the first time. Today, the United States has delivered 126 of those howitzers. And along with countries around the world, we've increased the number of howitzer systems for Ukraine's defenders by more than 18-fold. And since our first Contact Group meeting, the United States and our allies and partners have delivered a total of 26 long-range rocket artillery systems and the associated GMLRS rockets.

All these capabilities have demonstrably helped Ukraine fight back against Russia's aggression. And they have enabled Ukraine to resist Russia's ongoing onslaught. So we have come a long way by working together.

Today, four months after our initial Contact Group meeting, the war is at another key moment.

Russian forces continue to cruelly bombard Ukrainian cities and civilians with missiles and artillery fire. But Ukrainian forces have begun their counteroffensive in the south of their country. And they are integrating the capabilities that we all have provided to help themselves to fight and reclaim their sovereign territory.

So it's fitting that we're meeting back here at Ramstein.

We established this Contact Group as the free world was racing to meet Ukraine's most urgent requirements. But today, this Contact Group needs to position itself to sustain Ukraine's brave defenders for the long haul. And that means a continued and determined flow of capability now. It means moving urgently to innovate—and to push all of our defense industrial bases to provide Ukraine with the tools that it will need for the hard road ahead. And it means renewing and deepening our resolve to stand by Ukraine—with support and strength that doesn't hinge on any one battle.

We're here because we refuse to live in a world where big powers trample borders by force. Our support for Ukraine's bedrock right to defend itself doesn't waver based on any given clash.

Ladies and gentlemen, the face of the war is changing. And so is the mission of this Contact Group.

We'll work together to train Ukraine's forces for the long haul.

We'll work together to help integrate Ukraine's capabilities and bolster its joint operations for the long haul.

We'll work together to upgrade our defense industrial bases to meet Ukraine's requirements for the long haul.

And we'll work together for production and innovation to meet Ukraine's self-defense needs for the long haul.

Now, we're seeing the demonstrable success of our common efforts on the battlefield. And every day, we see the resolve of the allies and partners worldwide who are helping Ukraine resist Russia's illegal, imperial, and indefensible war of conquest. And we must evolve as the fight evolves.

In the weeks since the Contact Group last met, the United States has committed another $6.3 billion in security assistance to Ukraine.

Yesterday, President Biden approved the latest tranche of U.S. assistance to Ukraine, valued at up to $675 million.

And this is the Biden Administration's twentieth drawdown of equipment from U.S. stocks for Ukraine since last August.

And since our last meeting in July, many Allies and partners have come forward with their own important new deliveries of advanced radars, tanks, and armored personnel carriers.

The U.K. has sent a second tranche of M270 MLRS launchers and munitions. That brings British assistance to Ukraine to a total of 2.3 billion pounds.

I'd also like to thank Poland for serving as a linchpin of our efforts to support the Ukrainians and for its generous donations of military equipment. Earlier this summer, for instance, Poland transferred three battalions of 155-millimeter self-propelled howitzers to Ukraine.

Meanwhile, Slovakia, North Macedonia, and several other countries have announced their own critical donations of tanks and other heavy armor.

So I'm looking forward to building on that momentum and finding more innovative ways for us all to support Ukraine's defenders.

That means reinvigorating our defense industrial bases to match both Ukraine's priorities and our own needs. And it means coming up with new ways to accelerate our production of key capabilities.

In our discussions today, we'll also talk through the next steps in standing up an international training mission for Ukrainian forces.

And we're also going to talk about a new push to bring together our national armaments directors under the auspices of this Contact Group to intensify our efforts to meet Ukraine's long-term needs.

Ladies and gentlemen, looking around the table, I can see our unity of purpose. And I see determined Allies and partners who are just as resolute in supporting Ukraine as we were in April when we first met at Ramstein.

We've got a lot of work to do today.

But I know that we're all going to leave Ramstein this time with even greater momentum.

We've done so much. And we're determined to do even more.

And I know that we're going to deepen our shared resolve to help the people of Ukraine in their fight for freedom.